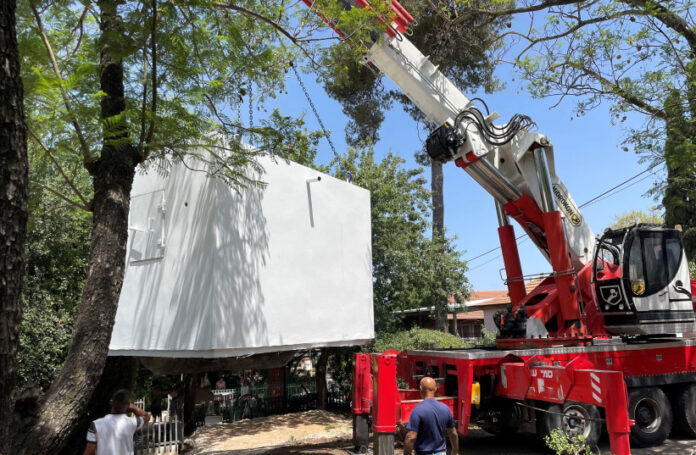 Christian supporters of Israel from around the world have donated another 36 portable bomb shelters to Israelis living on the country’s borders.

The shelters were delivered through the International Christian Embassy (ICEJ) in coordination with Operation Lifeshield. The funds have been raised over the last six months in the aftermath of the latest Hamas-Israel war that ended with 13 Israelis dead.

While the country’s southern region, especially the Gaza border communities, have received much attention, the need for bomb shelters in the North has become an increasing concern. Residents fear rocket attacks coming from Syria and Lebanon.

“Many Israelis living along the Gaza border have told us that these mobile bomb shelters indeed save lives and give their families the peace of mind they need to continue their daily lives under the constant threat of rocket attacks,” said ICEJ President Dr Jürgen Bühler. “We now want to focus more on the need for additional bomb shelters to protect civilians in the North.”

A report by the State Comptroller issued last year said that some 2.6 million residents of northern Israel — Jews, Muslim and Christian Arabs and Druze — do not have access to functional bomb shelters. The state has invested some funds in upgrading existing facilities but has not been able to provide enough, largely due to competing security concerns.

ICEJ, therefore, has stepped up its efforts in the area and supplied the majority of these latest shelters to towns in the northern Galilee and Haifa regions.

This latest supply included bomb shelters being sent to Haifa, Acre and Kfar Maccabi, for example — all in consultation with local authorities, security chiefs and social agencies — including to the Acre Israel Tennis Center facilities that teaches tennis and other sports to Jewish and Arab youths from disadvantaged families. Others have gone to Jewish and Arab farming villages in the Zevulun regional council, located near strategic facilities like oil storage tanks and chemical plants, which could be targeted by Hezbollah rockets.

“In selecting where to place these shelters, the Christian Embassy looks to meet other social needs in the community as well,” Bühler said. “We also are pleased to promote Jewish-Arab coexistence by sharing these shelters among the diverse communities in the North.”

Israel and Morocco impose blanket bans on all foreign travelers.

Iran Forcefully Clamps Down on Protests Against Growing Water Shortages

Iraqis Return From Belarus, but Some Say They Will Try Again to Reach the E.U.

Israel to provide Palestinians one million vaccines in alternate deal