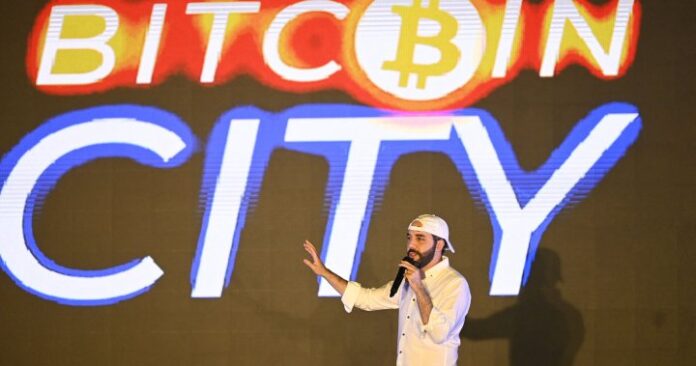 El Salvador’s President Nayib Bukele wants you to invest in his idea to build a volcano-powered “Bitcoin City,” although the International Monetary Fund (IMF) would rather you didn’t.

For as little as US$100, you’ll soon be able to buy a tranche of a “volcano bond” to fund the grand plan.

The circular, Bitcoin-shaped settlement would be built at the base of Conchagua Volcano on the Gulf of Fonseca, where El Salvador, Honduras and Nicaragua meet.

Bukele says geothermal power from the volcano will be used to mine the cryptocurrency.

However, the initial offering in 2022 will be to sell US$1 billion in bonds; half of which will be used to fund the city, and the other half will be invested in Bitcoin.

“It is going to include everything: residential areas, commercial areas, services, museums, entertainment, bars, restaurants, airport, port, rail, everything devoted to Bitcoin,” Bukele told a hyped-up audience at the launch event.

He says the only tax levied on the city’s residents will be the country’s 10 per cent value-added tax (similar to sales tax).

On Nov. 20, the 40-year-old leader made the annoucement, dressed all in white, with his baseball cap on backwards.

The stage graphics included a cartoon image of Bukele and a UFO, although, the event didn’t all go as smootly as he would have liked.

At times, the screen on stage failed to keep up with Bukele’s words, and he had to appeal to the technicians to change the slides.

It comes two months after the country adopted Bitcoin as legal tender alongside the U.S. dollar, something the IMF again criticized on Monday.

“Given bitcoin’s high price volatility, its use as a legal tender entails significant risks to consumer protection, financial integrity, and financial stability,” the IMF said in its staff concluding statement of the 2021 Article IV mission to El Salvador.

“Its use also gives rise to fiscal contingent liabilities.”

About 27 per cent of El Salvador’s electricity already comes from geothermal energy sources.

Ricardo Navarro from the Salvadoran Center for Appropriate Technology is more than a little skeptical about Bukele’s plan to use a volcano for the power-intensive Bitcoin mining process.

“My impression is that he lives in a parallel world. You know, a world of illusions,” said the environmental campaigner.

“It doesn’t matter where the energy comes from. What matters is the amount of electricity that’s going to demand that, and here in El Salvador we don’t have enough electricity produced with our own means. We have to buy oil for that. So that’s the problem.”

“I think the president has the impression that he puts a pipe [in] and he gets geothermal energy,” said Navarro. “If it were economically feasible, they would have done it already and not be importing oil.”

Bitcoin mining uses an estimated 115 terrawatt hours of electricity every year worldwide, according to the Cambridge Center for Alternative Finance.

That’s more energy than The Netherlands uses, and the nature of Bitcoin mining means that number keeps on rising.

Most of that energy comes from non-renewable sources,

Canadian Alex Tapscott is a keen advocate of cryptocurrency and its underlying blockchain technology.

“I think the devil’s in the details. I think there’s a lot that’s left to be explained about how Bitcoin City is going to work,” said Tapscott, who co-wrote the book Blockchain Revolution with his father Don Tapscott.

“But I think that the rollout so far of Bitcoin in the country has been better than I think a lot of people expected.”

The country gave US$30 to every resident who adopted a Bitcoin wallet, and a month after the September launch, the Salvadoran Foundation for Economic and Social Development said 12 per cent of people had used the currency.

That is despite reports of technical issues with Bitcoin ATMs and protests against the adoption of Bitcoin.

0:59
Protesters in El Salvador march against adoption of bitcoin as legal tender

Protesters in El Salvador march against adoption of bitcoin as legal tender – Sep 8, 2021

Tapscott beleives the worldwide attention alone will drive investment to the impoverised nation.

“This is clearly an unprecedented experiment, and it’s being done on the biggest scale really,” said Tapscott.

“I do think there are risks, but I also think there’s lots of potential. And I think that the alternative is hardly desirable for the country.”