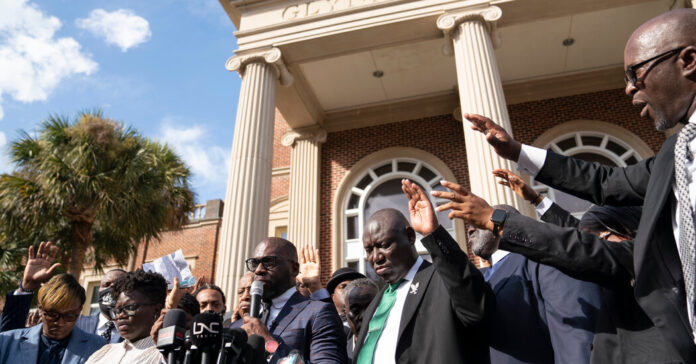 BRUNSWICK, Ga. — When Ahmaud Arbery, a 25-year-old Black man, was chased through a Georgia neighborhood by three white men and shot at close range, his killing was widely viewed as an act of racial violence.

One of the men uttered a racist slur moments after shooting Mr. Arbery, one of his co-defendants told the authorities. One of the trucks the men were in had a vanity plate with a Confederate flag symbol on it.

And yet over 10 days of testimony in a South Georgia courtroom, jurors heard no discussion of race or allegations of bigotry. Prosecutors largely shied away from the issue, despite chances to ask about it as they presented their case.

The absence has been notable, given that prosecutors signaled early on that they might make race an important aspect of their case.

On Thursday, Linda Dunikoski, the lead prosecutor, asked permission to tell the jury about the claim that Travis McMichael had used a racist slur — an allegation that Mr. McMichael’s lawyers have contested. Ms. Dunikoski faced significant legal hurdles in getting such evidence introduced. But before the judge could rule on the matter, the defense rested its case, and she declined her right to present rebuttal witnesses after hours of cross-examining Mr. McMichael on the stand.

Still, the absence of any overt discussion about race in court surprised legal experts and sparked disagreements over the wisdom of a prosecution strategy that might have been influenced by the fact that 11 of the 12 jurors are white.

“I’m at a loss,” Esther Panitch, a legal analyst and longtime Atlanta-based criminal defense lawyer, said on Thursday. “While the state doesn’t have the obligation to prove motivation, jurors certainly would want to know what would motivate defendants to commit a crime like this.”

The state murder trial, which is unfolding in the small coastal city of Brunswick, close to the site of the shooting, is not the last word on whether the defendants — Mr. McMichael, his father, Gregory McMichael, and their neighbor William Bryan — were motivated by racial animus: A federal hate crimes trial looms for all three of the men in February.

But in Brunswick in recent days, the gulf between the limited story presented in court and the broader story being told beyond earshot of the jurors seemed to yawn wider than ever.

Kevin Gough, the lawyer for Mr. Bryan, has repeatedly introduced race into the public narrative by arguing that the presence of prominent civil rights leaders in the courtroom, including the Rev. Al Sharpton, the Rev. Jesse Jackson and Martin Luther King III, could influence the jury. “We don’t want any more Black pastors coming in here,” he said at one juncture. Mr. Gough, following the rules of the court, has always made those comments while the jury was out of the room.

He was joined this week by Jason Sheffield, a lawyer for Travis McMichael, who said the jurors needed to be shielded from the “national conversation” that the case had generated.

Mr. Gough’s comments were widely criticized and prompted Mr. Sharpton’s National Action Network to invite scores of Black pastors to Brunswick on Thursday to show support for the Arbery family.

The Rev. Christopher J Pittman from First Bryan Baptist Church in Savannah said Mr. Gough’s comments were reminiscent of the rhetoric of the 1960s and earlier. “This takes me back in time,” he said. “We shouldn’t still be arguing about this.”

In theory, none of this is known to jurors, who, at the close of each day in court, have been instructed by Judge Timothy R. Walmsley not to seek out outside information about the case.

Instead, jurors heard repeated, detailed accounts of the way in which the three men chased Mr. Arbery through their neighborhood and were asked to consider whether they had legal grounds to do so. The defense told jurors that the men had cause to believe Mr. Arbery was a burglar amid a series of break-ins in the neighborhood. Ms. Dunikoski argued that they pursued him based on what she described as flimsy “assumptions and driveway decisions.”

They heard that Gregory McMichael had told police officers that Mr. Arbery had been “trapped like a rat” before he was shot. And jurors were shown the graphic video filmed by Mr. Bryan that shows Travis McMichael shooting Mr. Arbery three times with a shotgun.

A spokeswoman for the Cobb County district attorney declined to comment on the prosecution’s strategy. But Paul Butler, a former federal prosecutor and professor at Georgetown University Law Center, said the lopsided number of white jurors might have played a role in the prosecution’s decision to not be more aggressive in framing the case in racial terms. Before the jury was empaneled, prosecutors tried unsuccessfully to convince the judge to block the defense’s move to bar a number of Black potential jurors.

“I’m sure the fact that it’s a virtually all-white jury matters,” Mr. Butler said. “There’s a risk when race talk is introduced in a trial, so the prosecutors I think obviously saw a risk of introducing evidence about race.”

Understand the Killing of Ahmaud Arbery

The shooting. On Feb. 23, 2020, Ahmaud Arbery, a 25-year-old Black man, was shot and killed after being chased by three white men while jogging near his home on the outskirts of Brunswick, Ga. The slaying of Mr. Arbery was captured in a graphic video that was widely viewed by the public.

The victim. Mr. Arbery was a former high school football standout and an avid jogger. At the time of his death, he was living with his mother outside the small coastal city in Southern Georgia.

The trial. With an unsettling video set to play a starring role in court, the case bears similarities to that of Derek Chauvin, the former police officer found guilty of murdering George Floyd. The trial is likely to address issues such as vigilantism and the role racism played in the three defendants’ actions.

The jury. After an extraordinarily long process, 12 jurors in the case were selected. The jury, which is made up of residents of Glynn County, where more than a quarter of the population is Black, only includes one Black person.

Mr. Carlson said the introduction of racial themes also ran the risk that an appellate court might eventually rule such evidence to be overly prejudicial. And if prosecutors felt this week that they were winning, Mr. Carlson said, they might have decided the risk was not worth it.

Prosecutors had previously indicated to the court that they would, in fact, make race an issue. Just before opening arguments, the judge ruled that they could introduce photographic evidence of Travis McMichael’s truck, which showed that it was adorned with a vanity plate with the design of the old Georgia state flag, which incorporates the Confederate battle flag. The defense had sought to keep it away from the jury, arguing that the photo was meant to “telegraph some reprehensible motive, bias, or prejudice, which is not true.”

Last year prosecutors filed a motion saying they planned to introduce what they described as “racial” evidence, including a “Johnny Rebel” Facebook post by Travis McMichael, “racial messages” extracted from Mr. Bryan’s cellphone, and an “Identity Dixie” Facebook post by Gregory McMichael.

In a hearing, prosecutors read a text message from November 2019 in which Travis McMichael used a racist slur about Black people as he described the idea of shooting a “crackhead” with “gold teeth.”

In the weeks before the trial, however, prosecutors indicated that they had decided not to introduce “evidence of racial animus in the form of communications by the defendants with third parties” in their presentation of evidence, calling it a “strategic decision.”

Before the trial, defense lawyers had insisted that the case was far from the modern-day “lynching” that people like Mr. Sharpton had described it as, but instead a legal attempt to make a citizen’s arrest under state law at the time. Robert Rubin, a lawyer for Travis McMichael, said the case was about the “duty and responsibility” to keep the neighborhood safe, and noted the numerous times that Mr. Arbery had been spotted making unauthorized visits to a house that was under construction.

Even without any overt discussion of race in open court, said S. Lee Merritt, a lawyer representing the Arbery family in a civil case, the defense seemed to be “leaning in on the benefits of racial bias that they hope exists on the jury” by arguing that it was incumbent upon the defendants to confront “this outside danger, this mysterious Black man.”

Mr. Butler, the Georgetown law professor, believes that the prosecution should have brought up the issue of racial motivation before it rested its case. “If there is a verdict of not guilty, I think the prosecution’s failure to use the evidence of racism by the defendants will be blamed,” he said.

Still, John Perry, a pastor and former president of the local N.A.A.C.P. chapter, said it was “refreshing” that the jury was not dealing with the race issue. “The facts by themselves are strong enough to show what these men did,” he said. “When you get into race, you get into intent, and I don’t know how their intent could be proven.”

Allen Booker, a Brunswick city commissioner who represents a majority of its Black residents, said that regardless of what was discussed in court, he assumed the jurors understood that race was a factor in the case.

“If the 11 white people and the one Black person that live here don’t know that this case is about race, they could spend a year on it and still wouldn’t know it,” he said. “They know.”

Violent Threats to Election Workers Are Common. Prosecutions are Not.