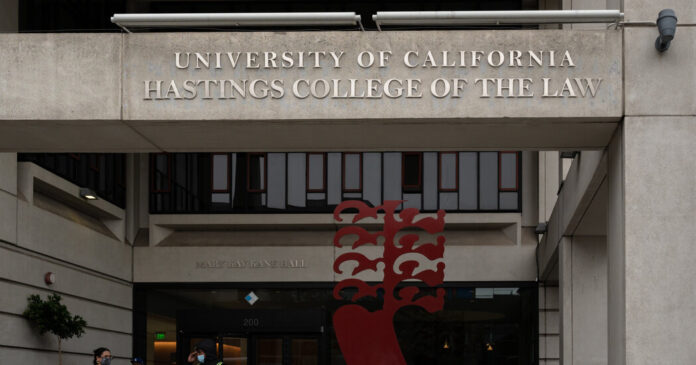 As a law student in 1950s San Francisco, Willie Brown paid little heed to the name of the school he was attending: the Hastings College of the Law, named after the state’s first chief justice, whose dark past was not widely known.

“People did not pay attention to anything named 100 years ago or 150 years ago,” Brown, the former San Francisco mayor and Democratic power broker, told me when I called him Tuesday evening. “None of us did. And particularly me.”

But as the nation reassesses its history, discussions of symbols and names are now a familiar part of political discourse. One of the latest historical figures to come under scrutiny is Serranus Hastings, the law school’s founder, who masterminded a Gold Rush-era slaughter of Yuki men, women and children in and around his Mendocino County horse and cattle ranch 160 years ago. The massacres were part of a pattern of killings paid for by the California Legislature in the early decades of statehood.

Last week, The New York Times published a front-page article on the Hastings legacy with the headline, “He Unleashed a California Massacre. Should This School Be Named for Him?” On Tuesday, Brown was applauding the unanimous decision by the board of directors of his alma mater, the University of California, Hastings College of the Law, to change its own name.

Joseph Cotchett, a high-powered lawyer and one of the biggest donors to Hastings, said the article helped galvanize alumni around the idea that the name must be changed.

“Right here in progressive San Francisco, there’s a school called Hastings,” Cotchett told me on Tuesday. “Are you kidding me? It’s scandalous.”

The dean and chancellor of the school, David Faigman, had previously argued forcefully for retaining the name, but told me he now saw the name change as a “necessary step.”

Faigman initiated an inquiry in 2017 into the actions of the school’s founder, and with it a wider debate over how to address the sins of the past. Before Tuesday’s decision he had argued that the college should keep its name while pushing for restorative justice, including maintaining a program focused on Indigenous law and pro bono legal assistance for tribes in Round Valley, the area where the Hastings massacres took place.

His original position, Faigman told me, was partly shaped by comments from Yuki tribespeople that they had felt erased by history and that removing the Hastings name would further seal that historical erasure.

But even after Tuesday’s decision a number of questions remain unanswered, including what the new name will be, and whether the state will be forced to repay Hastings descendants the $100,000 donated by Serranus Hastings, a sum that would today reach into the millions of dollars. The school’s enactment said the school was “to be forever known and designated as ‘Hastings’ College of the Law.”

Col. Claes Lewenhaupt, a great-great-grandson of Hastings who sits on the law school’s board of directors, said by text message Tuesday night that changing the school’s name was “the right thing to do,” although he said he was “saddened” to see the Hastings name go because of the school’s more recent association with helping the underserved.

Deb Hutt, a Yuki tribeswoman who lives in Round Valley, was also ambivalent. She said a group of alumni and other concerned San Franciscans reached out to her after the article was published. “A weight was lifted,” she said.

But she told me she wasn’t satisfied with simply a vote to change the name.

“They are trying to correct their wrongs,” she said. “It’s a shallow victory.”

In the summertime, visit Barrio Logan just south of downtown San Diego. Check out the art in Chicano Park and the weekly Low Rider show and cruise. There are interesting shops and food trucks as well.

And before you go, some good news

Spectacular fall colors arrived in Yosemite over the weekend, a vibrant — but probably brief — showing of reds, oranges and yellows.

See photos of the explosion on this blog dedicated to California’s autumn colors.

Podcast: The triple terror of tsunamis

Free Community College Is Off the Table, Jill Biden Is to...

The Man Helping Drive the Investigation Into Trump’s Push to Keep...