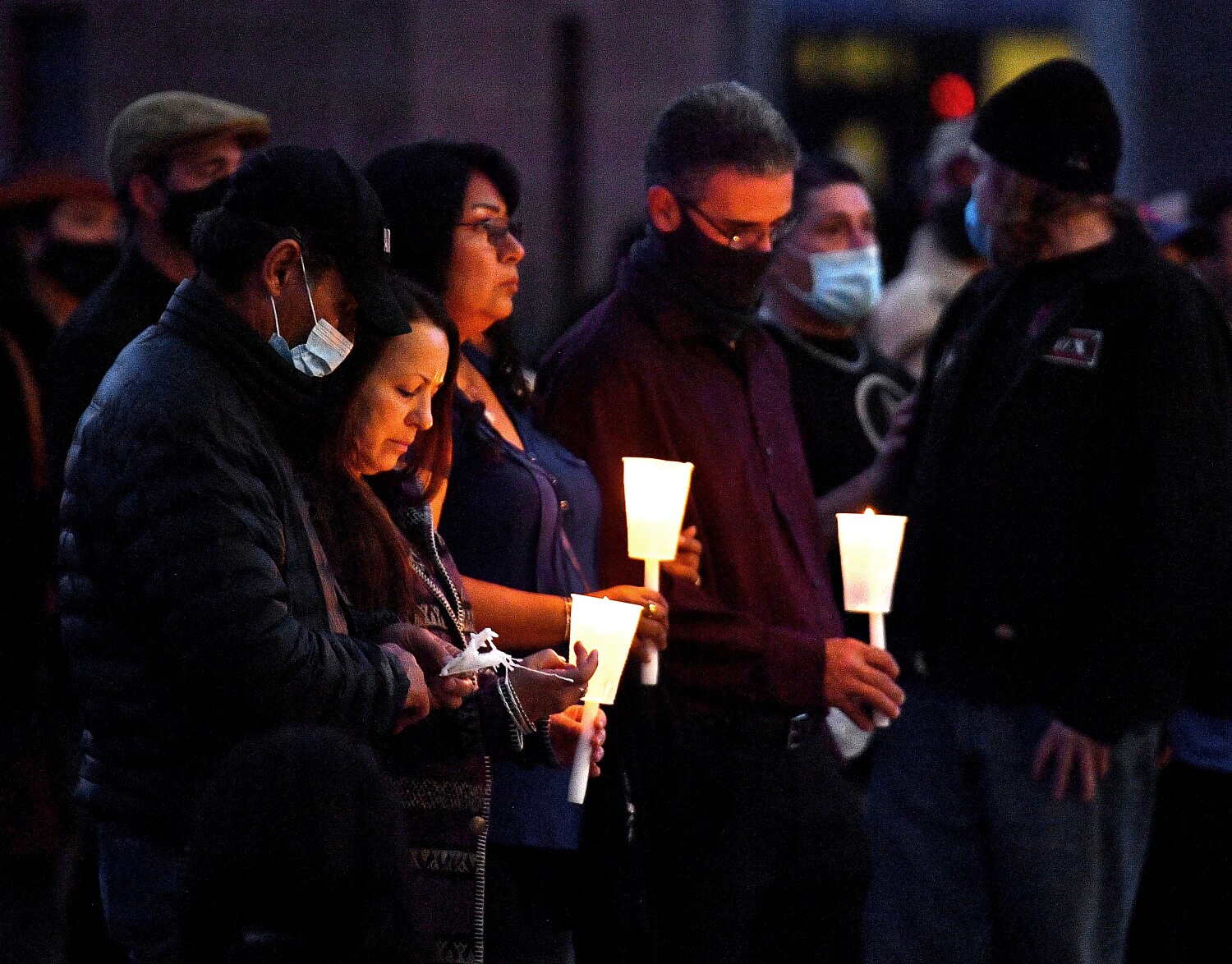 “This moment has shaken all of us to the very core,” IATSE Local 480 President Liz Pecos said, holding a lit candle in front of the pink-streaked New Mexico sky.

Hundreds of people stood in front of her, holding their own candles aloft as they gathered to mourn cinematographer Halyna Hutchins.

Many of those crowded into Albuquerque Civic Plaza on Saturday night were members of Pecos’ Local, which represents “below-the-line” crew members working on film and television productions in New Mexico.

A few of the vigil attendees had known Hutchins, working with her on the set of “Rust,” where she was fatally shot by a prop gun fired by actor Alec Baldwin.

But most were part of the larger family of crew members who live largely in Albuquerque or Santa Fe and power New Mexico’s booming, tight-knit film industry. These were people who had been in the trenches together, working the kind of punishing hours that have helped spark an ongoing reckoning around labor conditions on sets.

Lane Looper, a cameraman who worked with Hutchins on “Rust,” praised her to the crowd as “one of the most talented, kind and collaborative” people he had ever met.

“She’s a wonderful mom and a wonderful wife and just a wonderful soul. And I really hope more people like her exist,” he said, his voice constrained by grief. “I love everyone in this community. And thank you — I know I haven’t texted a lot of you back, but thank you because it means a lot.”

The 42-year-old Ukrainian native had been selected as one of American Cinematographer’s Rising Stars of 2019.

“Tonight is about Halyna,” Rhine said during her speech. “There will be plenty of time to focus on the who, on the what, on the why, in the future.”

Still, the looming questions about the circumstances that led to Hutchins’s death on Thursday, hours after a half-dozen camera crew workers walked off the set to protest working conditions, were difficult to ignore in the crowd. Safety protocols standard in the industry, including gun inspections, were not strictly followed on the set, several crew members told the Los Angeles Times on Friday.

“We’ve got to take care of ourselves, a lot of times people won’t look out for us,” one man said as he leaned in to hug several friends.

Across the crowd, costumer Kim Trujillo and Ashley Crandall, who works in props, were discussing how the productions both women were working on had made immediate changes on Friday in response to the horrific incident.

Crandall said the TV series she is currently working on had planned to utilize a replica gun with blanks for a scene on Friday but had made the last-minute decision to switch to an airsoft weapon — a discussion that had been shared with the whole crew, according to Crandall.

“It just made everybody feel so much more safe,” she said, characterizing the precaution as long overdue.

Trujillo, who like Crandall was clad in an IATSE shirt, said the production she was working on had announced they would now only be using rubber weapons.

Wynema Chavez Quintana, a costumer, was holding a sign with photos of Hutchins and hand-lettered text saying “She deserved a safe workplace!” and “S.O.S. Safety on sets!!”

Chavez Quintana said she related to Hutchins as a mother.

“She deserved to come home to her children,” Chavez Quintana said through tears. Chavez Quintana’s 25-year-old son now works on sets too, and she said she sometimes fears for his safety.

But amid the shock and sorrow, there was an undercurrent of hope — many said they hoped or believed that actual change might come from unbearable tragedy.

“We were about to strike about our health conditions and it barely got averted, and now I think everyone’s going to be fighting a little harder for our rights — for our bodily safety,” said Amrit Khalsa, a Santa Fe set dresser.

“We heard that there were problems on that set,” said Kahn, who, along with Hamm and Slattery, was in New Mexico to shoot the film “Maggie Moore(s).” “It’s an avoidable tragedy.”

In a statement to Deadline Saturday, “Rust” director Joel Souza, who was also injured in the shooting, thanked the local film community for the outpouring of support and said he was “gutted by the loss of my friend and colleague, Halyna. She was kind, vibrant, incredibly talented, fought for every inch, and always pushed me to be better.”

Among other safety concerns, several attendees at the vigil spoke of the need to provide crew members with hotel rooms when extensive shooting hours would otherwise demand that workers make the lengthy trip from Albuquerque to Santa Fe, or vice versa, on little sleep.

The cities are located roughly an hour’s drive down Interstate 25 from one another. The decision not to provide previously promised hotel rooms to crew members on “Rust” — many of whom in lived in Albuquerque, roughly 50 miles from the Bonanza Creek Ranch set in Santa Fe County — played a role in Thursday morning’s walkout.

Bonanza Creek Ranch was all but deserted on Saturday afternoon, with a padlocked chain closing off its rusting gate from the wide-open desert road. Inside the gate, two security guards lingered by a windblown American flag at the guard shack while an Australian news crew set up their shot across the street.

Twenty-odd minutes from the ranch in picturesque Santa Fe, talk of the shooting continued to ricochet through the close-knit town early Saturday.

Locals described the New Mexico film industry, which has been on the rise since the early 2000s and grown rapidly in recent years, as a deeply welcome boon to the city’s hospitality-driven economy.

New Mexico is small, with a population equivalent to a little more than 20% of Los Angeles County, and has one of the highest poverty rates in the nation — factors that have made many locals feel collectively invested in the success of the currently roaring film industry, whether they work in it or not.

They say the booming industry feels like an embedded part of the community. Sure, one might dance with Bill Murray at Cowgirl BBQ or spy Reese Witherspoon hanging out on the Plaza, but the interactions are decidedly low-key. Santa Feans pride themselves on their blasé attitude toward celebrity, which likely adds to the town’s filming appeal. Many said they were stunned by the tragedy.

“It’s a small town, and we cross paths with a lot of people who are directly connected,” hairstylist Laura Rivera said as she shared a plate of shoestring fries with two friends at a popular Santa Fe cafe.

Staletovich said he had been involved in pyrotechnic and gun scenes, but personal safety had never seemed like a concern because it had been “such a tight process,” even on low-budget films.

“Everything has been checked and double-checked and triple-checked,” he recalled, saying that he struggled to conceive of how the shooting had happened and felt a new sense of worry about future action work.

Local 600 will hold a similar vigil for Hutchins in Burbank on Sunday at 6 p.m. The union launched a GoFundMe effort Friday for her family. Hutchins is survived by her husband, Matthew, and a 9-year-old son.