Restrictions to ease for Northland, vaccination target in sight for Auckland and children return to school in lockdown. 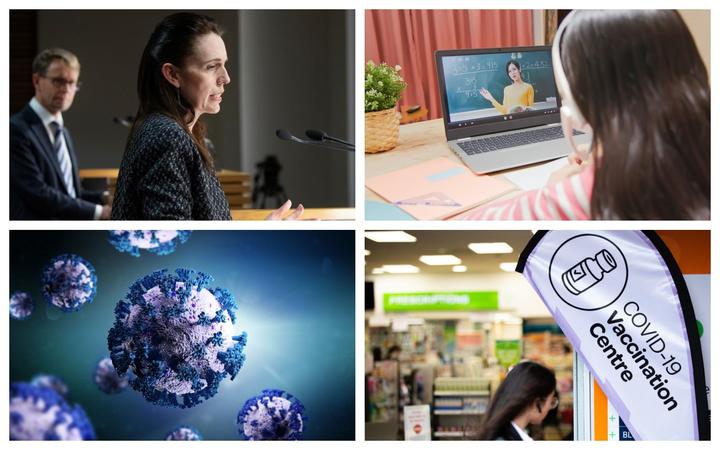 There were 60 new community cases of Covid-19 in the country today, the Ministry of Health reported.

In a statement, the ministry said 57 of today’s new community cases were in Auckland and three were in Waikato.

It said as at 10am, 36 of the cases were linked – 18 of which were household contacts – and 24 remained unlinked, with investigations continuing to help determine their connection to the outbreak.

There were 30 Covid-19 cases in hospital today: five in North Shore, 12 in Middlemore and 13 in Auckland. Five cases were in ICU or HDU.

The ministry also revealed that a staff member at Remuera Gardens retirement village in Auckland has been confirmed as having Covid-19 and was at work whilst infectious.

The ministry said there had been 4696 cases since the pandemic began.

Northland to move to level 2, parts of Waikato remain in level 3

It was announced today that Northland will move to alert level 2 at 11.59pm on 19 October.

Prime Minister Jacinda Ardern said it appeared the people who travelled in Northland had not spread Covid-19 further.

But he said concerns about exposure from a Covid positive woman who travelled around the region haven’t gone away.

For Waikato, Ardern said “the situation is different” with parts of the region currently in level 3 to remain there with a review on Friday.

Ardern said there was a need to act with caution in the Waikato after positive cases and wastewater testing came back positive.

Auckland to stay in level 3, step 1 for two weeks

Auckland will remain in level three with current restrictions for another two weeks.

Ardern said any easing of restrictions over this time would not work towards the plan of minimising cases while vaccination rates increase.

There are now Covid-19 cases across 124 suburbs of Auckland, she said.

She said the alert level 3 rules in Auckland are the toughest restrictions in place anywhere in the OECD at the moment.

Ardern acknowledged experts suggesting a level 4 circuit breaker for Auckland but said public health advised it would be unlikely to reduce case numbers “because of the nature of the outbreak and compliance has been an issue”.

“I know this is hard and I want to acknowledge the ongoing impact on Auckland businesses of staying at level 3.”

She said an enhanced business support package for Auckland is being worked on, which will be revealed on Friday.

“If we get this right, if we keep case numbers low while we vaccinate people, then it makes it easier for us to keep control of Covid while we ease restrictions in the future,” Ardern said.

She said non-compliance with level 3 rules had been one of the biggest contributors to new cases.

Today, the prime minister revealed the government will announce a new ‘Covid-19 protection framework’ on Friday for when the country is at a higher vaccination rate.

RNZ understands ministers will consider a traffic light-like system New Zealand could move to once the population is highly vaccinated.

It could mark the next phase, away from using alert level restrictions, to a mix of protective measures in the event of outbreaks.

That could include mask use, gathering limits, social distancing, proof of vaccination and scanning.

It could be some months before it would be ready to be implemented.

However, at today’s briefing Ardern would not confirm if the Covid protection framework will be a ‘traffic light system’.

Back to school, but lockdown continues for many

Nearly 400,000 children in Auckland, Northland and Waikato started the final school term of the year learning from home today.

Schools in the three regions are remote learning because they are in alert level 3, though in Northland and Waikato that status was scheduled to change tonight.

Auckland principals told RNZ re-engaging children and preparing teenagers for NCEA exams were their priorities for the fourth term.

The biggest job ahead was preparing senior students for NCEA exams in November, she said.

Vaccination target in sight for Auckland

Director-General of Health Ashley Bloomfield told Morning Report current projections show it will take Auckland just over a month before 90 percent of its population is fully vaccinated.

Bloomfield said the weekend’s Super Saturday Vaxathon gave nationwide vaccination numbers an important boost but his focus was now on helping those still vaccine hesitant to also get the jab.

“I think it was a great day,” he said, reflecting on the more than 130,000 people who received either a first or second dose on Saturday.

“The sense of energy and collective action on it was really great.”

Just over 70 percent of Auckland’s eligible population was now fully vaccinated, with 89 percent having had one dose.

Bloomfield said the figures were encouraging and modelling showed the city could hit the 90 percent fully-vaccinated milestone over the next “three to four weeks”.

Footage has been circulating on Instagram of the event attended by dozens of young adults who appeared to be flouting Covid-19 restrictions.

One partygoer posted that attending the party and breaking the rules was “a huge regret” and a “selfish” and “stupid decision”.

Meanwhile, about 2000 people attended an anti-lockdown protest rally at the Auckland Domain on Saturday.

Director-General of Health Dr Ashley Bloomfield said so far, there have been no positive cases that have come out of protests in Auckland. “Not as yet, our hope is there aren’t.”

Waning compliance has been a growing concern in this Delta outbreak, and the government has blamed it for the rise in cases.

Prime Minister Jacinda Ardern said the reported North Shore party that Police were investigating was “clearly a breach of the rules”.

Ardern said she hadn’t seen the footage of the party on the North Shore, but had it described to her. “That was enough,” she said.

Vaccination rates for Taranaki Māori have continued to be slow, with just 62 percent having received a first dose and only 38 percent fully innoculated.

By comparison 80 percent of the eligible population in Taranaki have now had a first dose and 57 percent are fully vaccinated.

When vaccination bookings were factored in those figures rose to 82 percent and 75 percent respectively.

The national rate for first dose vaccinations is 85 percent and 65 percent of people across the country are now fully vaccinated.

“These numbers are indicative of the hard mahi being done by vaccination teams across the programme, and the response of the Taranaki community to the urgent need to increase vaccination rates with Covid-19 breathing down our necks.”

Clayton-Smith said the region needed to maintain momentum and was now focussed on the goal of exceeding 90 percent-vaccinated by the end of the year.

How a lot of the Seaspiracy message ought to we be...