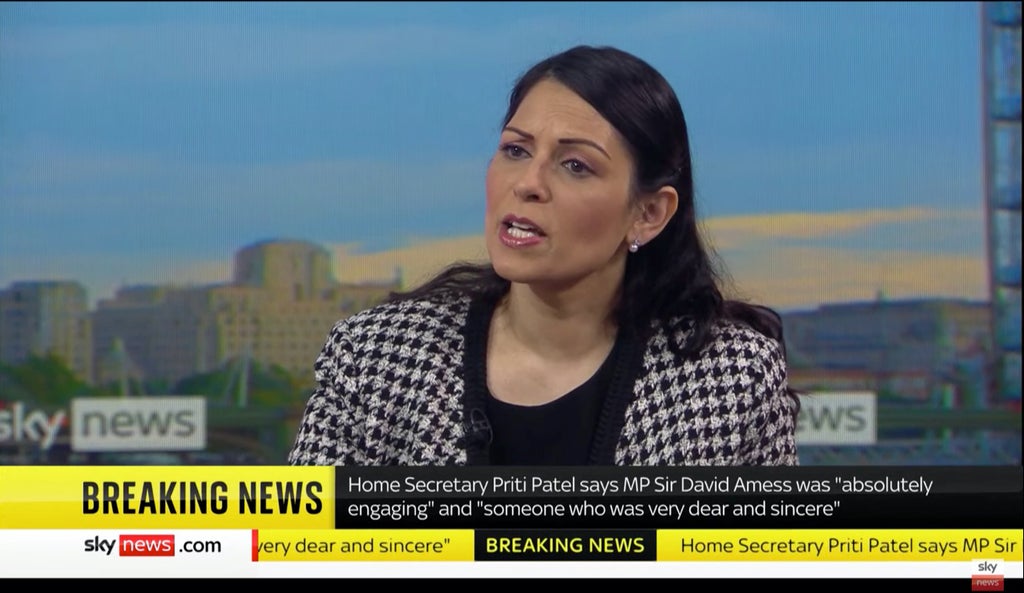 Home secretary Priti Patel has said she could remove the right to anonymity on social media in the wake of the murder of Sir David Amess, to stop the “cruel and relentless” abuse of MPs and others.

Ms Patel said that she and many other MPs had suffered “appalling” online attacks and warned: “We can’t carry on like this.”

She said she wanted to make “big changes” to the law to deal with the problem, and made clear a ban on anonymous posts was being considered.

Asked on Sky News’s Trevor Phillips on Sunday what could be done to tackle the coarsening of political debate in the UK, Ms Patel replied:  “This is about wider public discourse and I would go as far to say social media and anonymity on social media, where Members of Parliament are the subject of some of the most cruel comments and attacks, and they are relentless.

“I’ve seen my colleagues go through some of the most appalling attacks online, and I have as well.”

Asked whether she could introduce legislation to remove the right to online anonymity, she replied: “I want us to look at everything and there is work taking place already.

“We’ve got an Online Harms Bill that will come to parliament. There’s work taking place on it right now.

“I’ve done a lot of work on the social media platforms, mainly around encryption and areas of that nature.

“But we can’t carry on like this. I spend too much time with communities who have been under attack, who’ve had all sorts of postings put online and it’s a struggle to get those postings taken down. We want to make some big changes on that.”

Shadow foreign secretary Lisa Nandy said Ms Patel’s comments were “a bit rich” after the government failed to back Labour calls for penalties for tech executives who fail to prevent their platforms being used for abuse.

She said there was a place for “limits” on the anonymity of accounts, but warned that an outright ban could catch people with legitimate needs to protect their identity online.

“The difficulty with removing anonymity altogether is that you’ve got pro-democracy protesters and campaigners, you’ve got whistleblowers, people around the world who sometimes have to use some level of anonymity in order to make themselves heard,” Ms Nandy told Sir Trevor Phillips.

“There are limits perhaps that you can put on anonymous accounts for what they’re able to do and how they’re able to interact with other people online, and surely there have to be repercussions for people engaging in what would be criminal behaviour if it happened in person, but doing so online.”

But she added: “It is a bit rich for the home secretary to say that she takes that very seriously when the government have been dragging their feet on this legislation for years and currently we’re at a situation where they’re not proposing that there’ll be any penalties for top executives of tech companies who don’t abide by the online proposed code if there are repeated breaches of that code.

“If they’re not upholding their responsibilities there ought to be penalties for that. We can’t continue with a situation… where some people are targeted so severely that it does impact on their ability to speak out.”

In a later interview on BBC1’s Andrew Marr Show, Ms Patel said that any restrictions on anonymity would have to be “proportionate and balanced” to ensure that pro-democracy campaigners were not impacted.

Ms Nandy said: “We’ve got to get the balance right, because social media can be an enormous force. I see it very much in the course of my day job where you’ve got some incredible campaigners – the women of Belarus, the pro-democracy protesters in Hong Kong, the young people of Afghanistan – they’ve managed to use social media in order to make themselves heard.

“And if you speak to ChildLine they’ll say that social media has been a major problem for a lot of young people, but it’s also been a way in which young people can now reach out and get help in a way that they couldn’t when I was a child.

“So we’ve got to get the balance right to make sure that we use this as a force for good. In every era where we’ve been through technological revolutions that’s always been the case.

“The one thing I do agree with Priti Patel about is that I really don’t think that we’ve got to grips with this yet. We haven’t worked out how to manage it so that it works in the interests of democracy, rather than working against it.”

‘Our most common call is shootings or stabbings’: A night with London’s Air Ambulance

COVID-19: Omicron may be more infectious – but do we need to worry if it causes less severe disease?

Authorities’s catch-up tutor programme will attain lower than half of deprived...