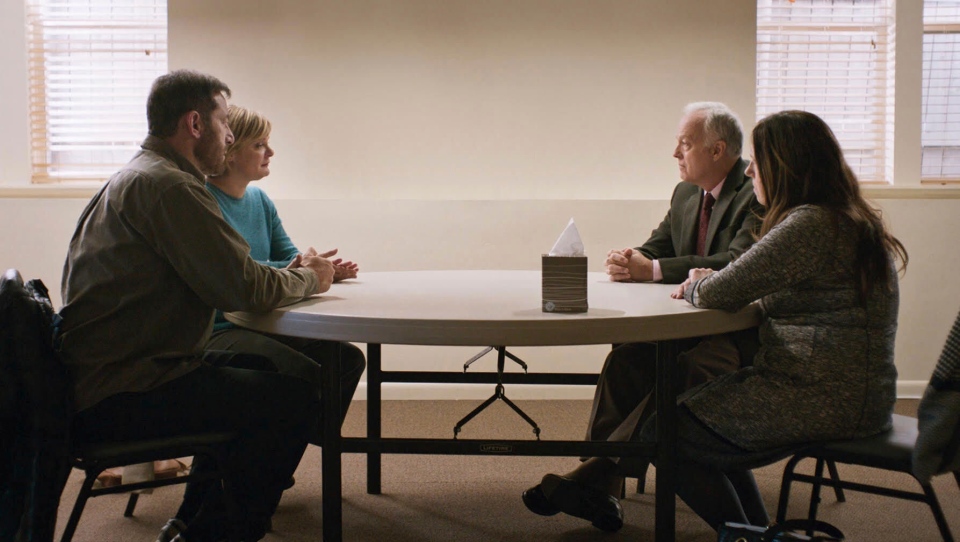 The story of “Mass,” a new drama from writer-director Fran Kranz, now playing in theatres, is simple but the emotions it evokes are anything but.

A bland meeting room in an Episcopal church in Idaho is the backdrop for the meeting of two couples bound together by shared trauma. Years before, Richard and Linda’s (Reed Birney and Ann Dowd) son Hayden shot and killed eleven kids in a high school massacre, including Gail and Jay’s (Martha Plimpton and Jason Isaacs) son Evan.

The intimate summit is meant to provide clarity and closure, but distrust and frustration steer the proceedings as they volley anger and recrimination back and forth.

“Mass” often feels like a stage play transposed to the screen. The bulk of the “action” takes place in one room, around a table as the four hash out the events that shaped their lives in the aftermath of the tragedy.

A tempest of anguish, blame and forgiveness, it forcefully mines the emotion of the situation without resorting to sensational flashbacks or lurid recreations of the film’s defining event. Instead, director Kranz trusts the performances and the words to do the job.

“I loved Hayden so much,” says Richard, “but maybe he should never have been born.”

Questions about responsibility, radicalization, gun culture, and mental illness are woven into “Mass’s” fabric, but the movie is more interested in the human dynamic than answering those queries. This is about the who, not the why.

To that end, the main cast members are never anything less than believable. Each explore a different avenue of grief and remembrance, and each deliver an acting masterclass. Restrained and realistic, the actors go deep, unconcerned with flashy pyrotechnics or showboating.

“Mass” is raw and real, devastating, nuanced and somber, a beautifully acted study in misery that allows for a flicker of hope. 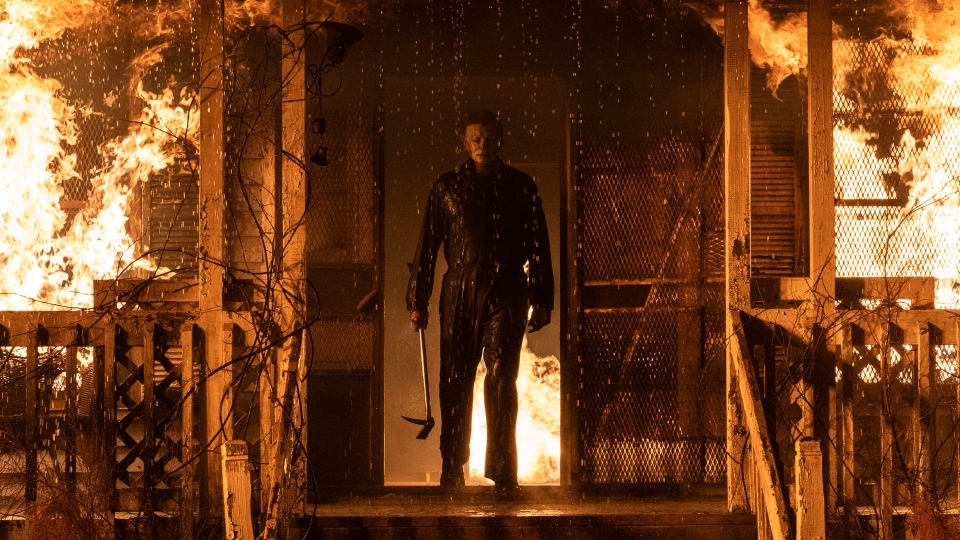 Keeping track of the storylines of the various “Halloween” movies and their sequels can be a mind-bending experience.

Forty-three years ago, the original John Carpenter-directed movie established many of the rules of the slasher genre, and spawned a prolific franchise that so far has churned out an additional 11 movies detailing unstoppable masked killer Michael Myers’ penchant for killing good-looking teenagers.

There have been reboots, returns, prequels, sequels, and remakes. Laurie Strode, the original film’s heroine played by Jamie Lee Curtis, has faked her own death, gone into hiding, decapitated, shot and stabbed Myers and yet, a new movie, “Halloween Kills,” featuring Strode and Myers, hit theatres this weekend.

Director David Gordon Green gets around the labyrinthine comings-and-goings of the mad-masked killer by simply ignoring the movies made between 1981 and 2009. His 2018 film “Halloween” is a direct sequel to the 1978 film of the same name.

Confused? No need to be.

All you really need to know is that after an extended flashback to 1978, it’s Halloween night in Haddonfield, Ill., and the action picks up minutes after the 2018 sequel.

Michael Myers, the “essence of evil,” is in the basement of a burning house, trapped there by Laurie (Jamie Lee Curtis), her daughter Karen (Judy Greer) and granddaughter Allyson (Andi Matichak). The nightmare should be over, but this is a “Halloween” movie, which means the nightmare will never be over. Myers manages to escape and, as he resumes his killing spree, Laurie, her family and some motivated townsfolk aim to end his reign of terror.

“You and Allyson should not have to keep running,” Laurie tells Karen. “Evil dies tonight.”

The best horror movies are never about the monster or the killings. That’s the gooey, gory stuff that keeps us in our seats, ready to absorb the larger social messages woven into the script. “Halloween Kills” wants to make poignant, timely points about how anger divides us and fear keeps us apart, but, trouble is, “Halloween Kills” is not one of the better horror films.

It is brutal. Michael Myers is as unrelenting and remorseless as ever, maybe even more so. Green’s interesting POV shots of the victims coupled with nasty, squishy sound effects provide several memorable moments of gory glee that horror fans will enjoy. Slash, slash, squirt, squirt! Oh my! He’s got blood on his shirt!

The first half of the movie offers up rather inventive kills. It’s fun when Myers is onscreen, lumbering his way toward another victim. Unfortunately, it’s less fun when the vigilante mob endlessly chants “evil dies tonight.” We get it.

And everything else about the plot.

For such a simple story, they sure do waste time explaining the same points over and over. Add to that over baked dialogue—”Let him take my head,” Laurie sneers, “as I take his.”—and a too-long running time and you’ll be wishing it was already Nov 1. 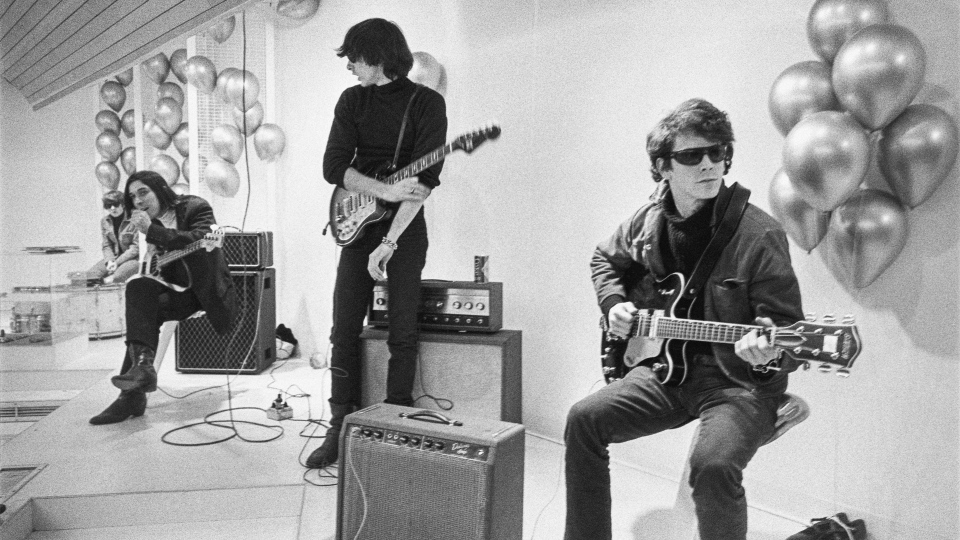 Fans of The Beatles and The Rolling Stones may disagree, but The Velvet Underground is arguably the most influential band of the late 1960s and early 1970s.

“The Velvet Underground didn’t sell many records,” said Brian Eno, “but everyone who bought one went out and started a band.”

They pointed the direction for everyone from David Bowie and Patti Smith to U2 and The Black Angels, and “The Velvet Underground,” a striking new documentary from director Todd Haynes, and now playing on Apple TV+, aims to bring people up-to-date on one of the most ahead-of-their-times bands of the 20th century.

Narrated by interviews with friends, family, colleagues, and, most importantly of all, the band, guitarist and singer Lou Reed, guitarist Sterling Morrison, bassist and violist John Cale, singer Nico, and drummer Maureen “Moe” Tucker, the film is a trippy look at the tumultuous time in New York City’s art world that gave birth to the band.

“That love and peace crap,” says Tucker, “we hated that.”

Using split screens, montages and plenty of archival footage, Haynes paints an impressionistic portrait of the influences—early rock n’ roll, doo-wop, gay life in New York, drugs, Andy Warhol and more—that go a long way to reconcile how Cale’s experimental “drone” work—the “hum of Western civilization,” he calls it—blended with Reed’s more melodic sense to form a renegade sound nobody had heard before. Add to that, lyrics that essayed heroin addiction, death, sado-masochism and other topics not usually sung about in three-minute pop songs and the result is aggressively radio unfriendly rock whose echoes are still felt today.

Haynes meticulously walks us through the band’s history, the rise, fall and ugly dissolution, wallpapering the movie with a visual onslaught of images that suggests the multi-media presentation Andy Warhol created for the band’s live performances. The pop artist saw those shows as a “chance to combine music, art and films,” and the documentary continues that spirit to capture the excitement of the story. The storytelling is rather conventional, linear, but the visuals are an idiosyncratic eyeful that match the ambitious nature of the music.

“The Velvet Underground” focuses on the band’s classic line-up heyday, giving later incarnations a bit of a short shrift. Nonetheless, the doc captures the mood and the spirit of a band music journalists have struggled to pigeonhole for decades.

Researchers to begin human trials on made-in-Canada COVID-19 vaccine you inhale, not inject

Unvaxxed loved ones? How to handle tense family gatherings over the...

Sofas, recliners from Vietnam, China underneath tariffs as much as 300%...