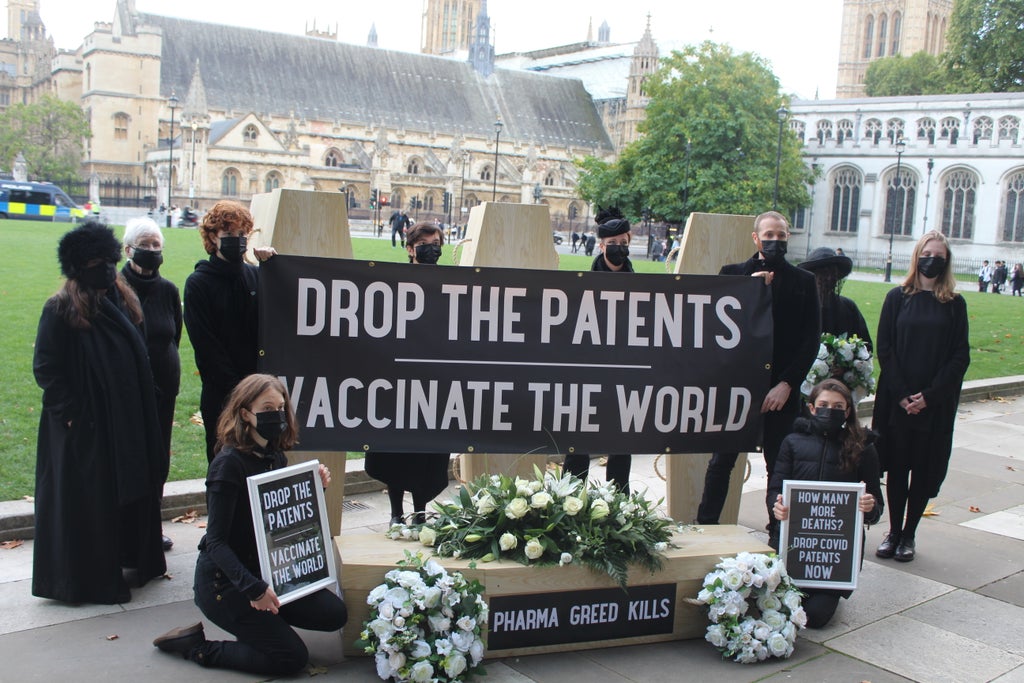 The British government must lift its opposition to a vaccine patent waiver which would allow poorer countries to manufacture their own coronavirus jabs, campaigners have demanded.

In protest at the UK’s stance on the issue, dozens of demonstrators gathered outside parliament on Tuesday evening and carried coffins to Downing Street as a way of symbolising the lives that are being lost due to vaccine inequality.

Shouldered by protesters clothed in black, the four coffins, which were laden with flowers, bore the messages “Drop The Patents” and “Pharma Greed Kills”.

A year ago, India and South Africa asked the World Trade Organisation (WTO) to consider temporarily waiving intellectual property rights for Covid-19 vaccines so that the world’s neediest could be inoculated faster.

Although dozens of countries have now endorsed the proposal, the EU and a handful of countries including the UK have opposed the move.

Global Justice Now, the campaign group which led the demonstration, says the UK government must revise its position, pointing out that 3.5 million people have died from the virus globally since the policy was first proposed. This is equivalent to 10,000 people dying each day from Covid-19.

Nick Dearden, the director of the organisation, highlighted the disparity in vaccination rates between wealthy and poor nations by noting that the UK has fully immunised more of its citizens than 132 other countries have combined.

While the UK’s population is just 68.2 million, the total population of the 132 other nations is more than 1 billion, according to Global Justice Now.

“We think that’s obscene in moral terms. It’s also very stupid and short-sighted: the more this virus is allowed to run unchecked in certain parts of the world, the likelier it will mutate and we will eventually end up with a variant that ovecomes the vaccines that we’ve got here,” Mr Dearden said.

He added that Britain and Germany are the leading members of the group which stands against the patent waiver.

However, Germany, the EU country said to be most against the waiver, could soften under a new government. If this happens, the UK would be even more of an outlier.

Alena Ivanova, campaigns officer at Global Justice Now, stressed that the situation was “unsustainable” for both the global south and the rest of the world.

“The pandemic has shown that this is a very interconnected world. The loss of life and the long-term economic impact of the pandemic will come back to bite us.”

Ms Ivanova added that the coffins, which made their way up Whitehall accompanied by sombre violin music, were used “to bring home the message that we have put in danger actual people’s lives, who could have been saved in the last 12 months”.

Diarmaid McDonald, of Just Treatment, a group which campaigns for health over corporate profits, issued a similar, if more strongly-worded, rebuke. “The UK government’s complicity in this means they’ve got blood on their hands. They’re extending the pandemic,” he said.

A government spokesperson said the UK was proud to be playing a leading role in the global effort to create and distribute Covid-19 vaccines.

They also said Britain would engage “constructively” on the waiver issue, but emphasised that the world needed to focus on expanding its existing vaccine distribution system.

Fiona Corr, one of the demonstrators who took part in the march, said she was disappointed with the UK’s approach to the potential waiver.

“I was hoping that when America changed their position, we would follow suit. But it didn’t happen, which is really disappointing,” she told The Independent. “It’s an emergency – people are dying. People should come before profits.”

Mr Dearden, head of Global Justice Now, said the situation was reminiscent of the HIV/Aids crisis in the 1990s and 2000s, when pharmaceutical profits stood in the way of tens of thousands of people being treated.

But he said he was optimistic that change was coming. “If I have a hope, it’s that at least we will learn the lessons of this pandemic and fundamentally change the way pharmaceutical research and development works,” he said.

SNP on the right track for majority in Scottish election –...