The “many sleepless nights” aren’t over for the man protecting Friedensreich Hundertwasser’s legacy. 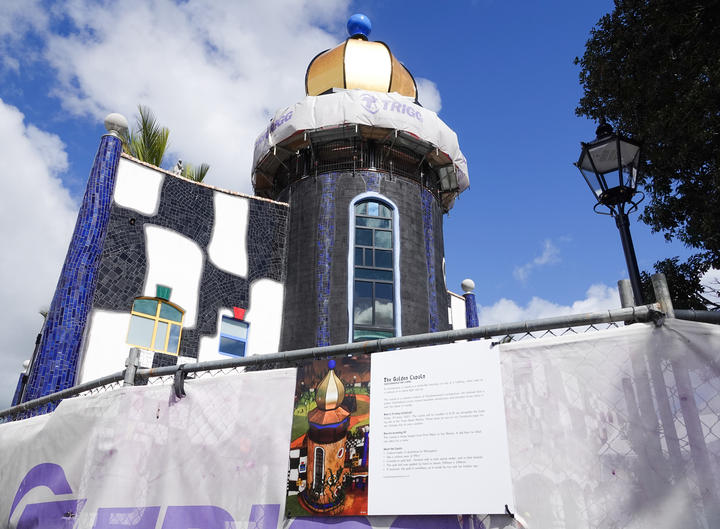 Hundertwasser, one of the 20th century’s most celebrated European artists, spent 30 years living near Kawakawa before his death in 2000.

Now his last unbuilt sketches are coming to a black and white-checked, golden-topped, greenery-laden life in the Whangārei town basin.

And Richard Smart, a Bay of Islands carpenter and architectural designer who worked for the Austrian-born artist for eight years, is the only representative for the Hundertwasser Foundation in Aotearoa.

Smart has to pinch himself seeing Whangārei’s new art centre – an idea mothballed for decades – now just months from completion. 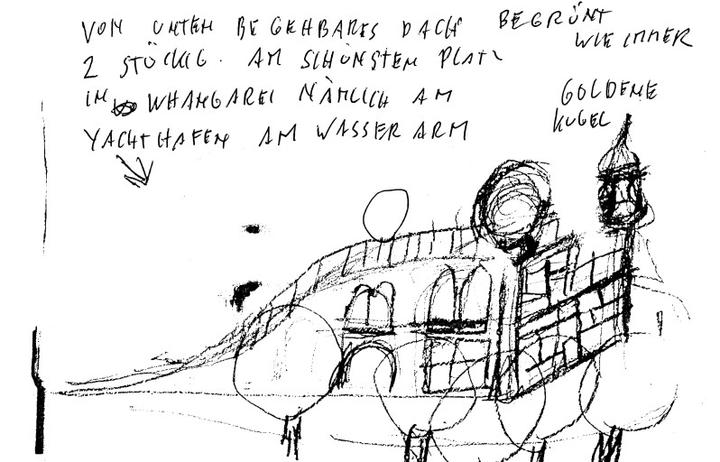 A sketched impression of the Hundertwasser Art Centre from 1993.
Photo: Supplied

It will be home to about $16 million worth of Hundertwasser’s works – the only permanent collection outside of Vienna – as well as the Wairau gallery, the world’s first gallery dedicated solely to contemporary Māori art.

But there are still “daily struggles”.

By June last year, the project’s costs had overrun $4 million.

Smart has seen Covid-19 cause further harm, since.

“This last lockdown now, basically the site has lost a month. When you’re three months out from opening and you lose a month – that’s difficult.”

And with borders closed, there are no qualified Hundertwasser curators in New Zealand to install the exhibition.

It is a talent so precise that even Smart can’t do it over video calls, so next week he flies to Austria to be inducted.

“This is the crux of the whole project,” he says, pointing to copies of Hundertwasser’s first 1993 sketches.

“People complain desperately that they [the foundation] are control freaks and they’re this and they’re that. But they don’t disagree. They say no, that’s our job.”

All going to plan, by November Smart will have returned, MIQed, and started meticulously preparing the inside of the building for opening on his former boss’ birthday, 15 December. 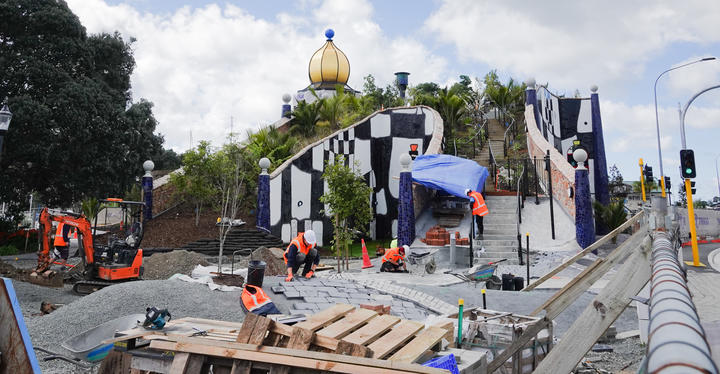 To some, the centre is a ridiculous luxury built at the same time the number of homeless people in the Whangārei CBD rose from 21 to 293 in just two years.

When the council ditched the building from its Long-Term Plan in 2014, the Prosper Northland Trust rallied a resistance movement.

So a referendum was held in 2015, and the centre proposal won.

But how was Whangārei going to pay for it?

The council gave the Prosper Northland Trust a two-year deadline to raise the first $16 million.

Barry Trass, a property developer by trade, put thousands of voluntary hours into the campaign as the trust’s former chair.

“We got knockbacks, so many knockbacks, and quite easily could have given up on a number of occasions. But we had a pretty good group of core people and then a huge number of supporters who were relentless.”

Some of these knockbacks were personal for Trass.

“Ads in the paper, slagging me. I had vandalism done on my property. I had all sorts of phone calls and letters.”

Some joined the crowds to see the gold-covered, 8-metre-tall cupola hoisted on top of the building in June.

“I thought ‘What the hell are you doing here?’ But they were all saying how great it looked. It was quite interesting. You have a little bit of a giggle to yourself.”

Unfortunately, misinformation peddled by some opponents has lingered on the fringes. 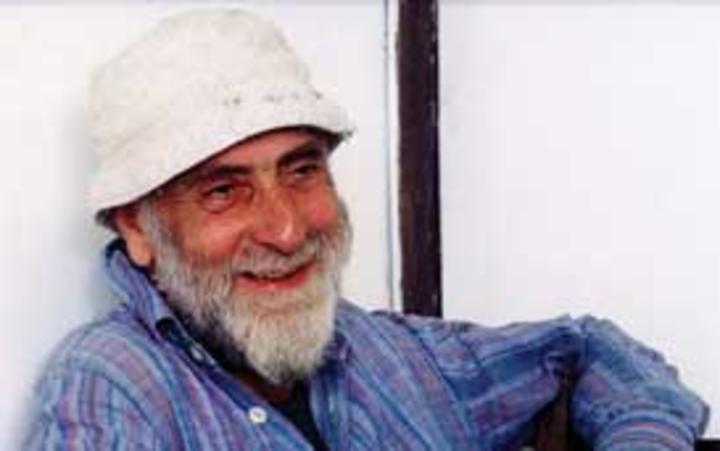 People have accused Hundertwasser of being pro-Nazi – the Jewish artist’s aunt and grandmother died in the Holocaust and he joined Hitler Youth temporarily to protect his family from the SS.

Other objectors have tried to say he was an extradited paedophile – a vicious untruth spread by a spambot.

The smearing is much less of a problem now, although six weeks ago Hātea Art Precinct management distributed draft answers for staff to respond to what they called “malicious” statements and “tricky” questions from the public.

Advocates like Trass expect the reputational attacks will diminish further when doors open.

And, he says, the centre has already been reason enough for a handful of “artistic” contacts to move to Whangārei.

The project needs them.

Last year the Hātea Art Precinct predicted a $1.53 million surplus six months after opening, but that has since reduced to just $19,000.

And this year’s statement of intent says “donations will be critical to our survival” and “we must charge an entry fee”. 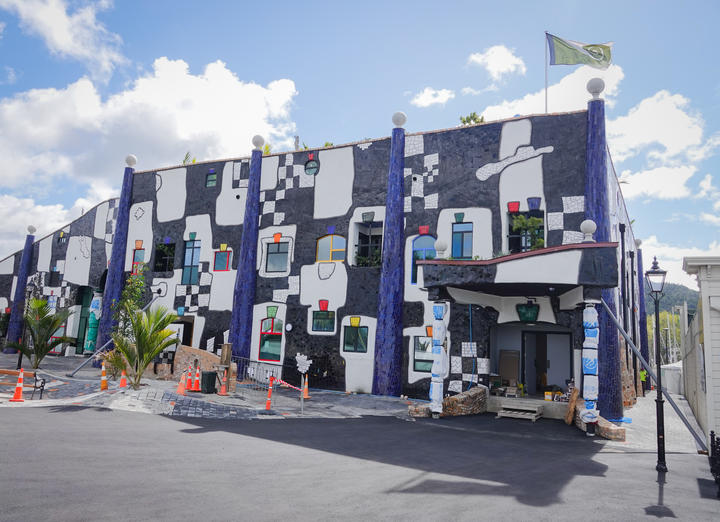 Perhaps a posthumous project designed by a creative who famously said “the straight line leads to the downfall of our civilisation” was always going to have a crooked path to completion.

Former Whangārei Art Museum Trust chair Grant Faber thinks that’s just been the “nature” of it – coming within “a hair’s breadth” of missing each milestone.

“The project could have fallen over at a number of different hurdles.”

And he thinks the council should be propping it up until borders reopen.

“They went through a pretty rigorous process which was contentious and obviously council were divided. They came to a decision about the level to which they would support it and they’ve honoured that position. But that line in the sand is very, very old.”

Faber is frank: “It has really cost the ratepayer very very little.”

He went to Vienna in 2008 to win the Hundertwasser Foundation’s support (for the second attempt) to revive the idea.

“There’s been a lot of negative spiel about it, the cost, but you can’t pay for a thing like this. You just cannot put a value on it.”‘

Mayor Sheryl Mai is the first to admit the centre has had “a tortured pathway to fruition”.

And she acknowledges the council’s $4.1 million contribution “pales into insignificance” compared to philanthropic and central government backing.

But for now, she is confident there will be enough visitors to “run a successful operation,” and beyond that, “there really is no necessity for the local ratepayers to be involved”.

Wairau Māori Art Gallery board chair Elizabeth Ellis (Ngāpuhi, Ngāti Kuta, Ngāti Porou Te Whānau a Takimoana, Ngāi Tane) has stayed out of the politics and “focused totally” on the art itself.

She believes the Wairau gallery is still not widely known about and is adamant entry must be free.

“I really want out Māori art gallery to have the Māori community in there,” she says, Zooming in from Auckland lockdown.

“It is a proven fact from other galleries in the country that charging people puts people off.” 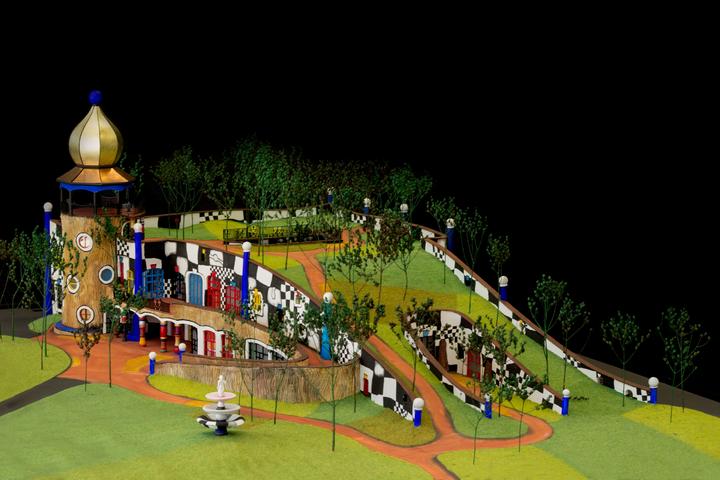 The project – from start to finish – would have been easier if New Zealand loved Hundertwasser the way he loved New Zealand.

“I’m sure it affected him, he kept offering things, and he kept being rejected.”

He winces, when he remembers how “the [national museum] model was just quietly gotten rid of”.

“And today still nobody knows what happened to it,”

But if Hundertwasser saw now what was coming to be, Smart believes the artist would feel “vindicated”.

Opening day plays out in Smart’s mind sometimes, and people start to flow through.

“We’ll just have them raining down on us. You know, let people complain about Auckland, we’ll be thankful for them.”