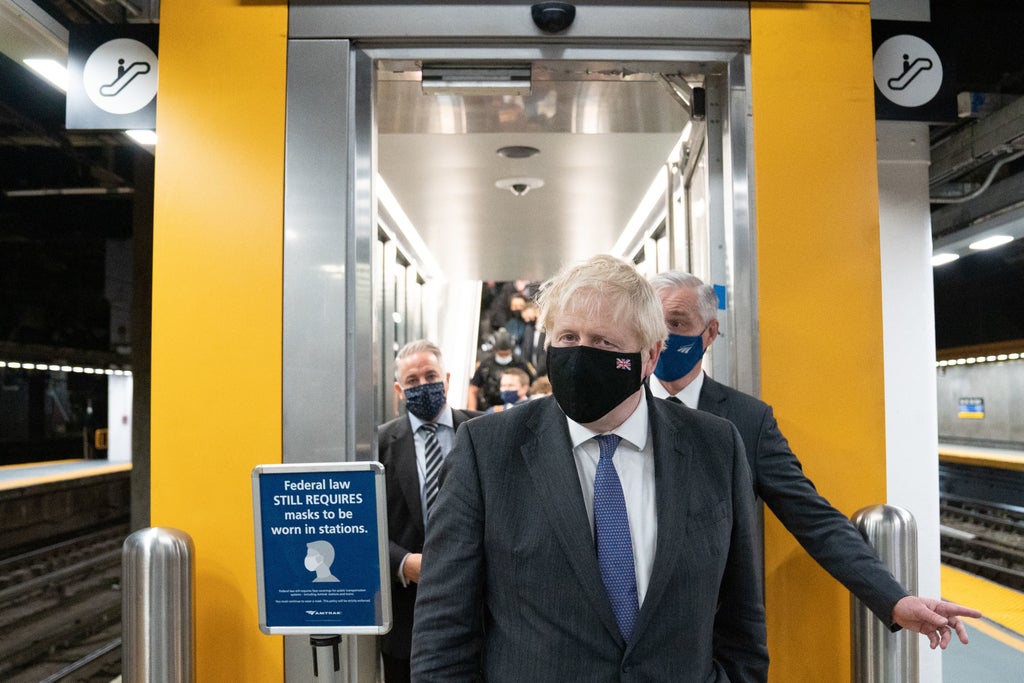 Boris Johnson will today issue a call for the world to “grow up” and address the threat of climate change to the future of humanity.

Speaking to world leaders at the United Nations in New York, the prime minister will say that mankind has behaved like a reckless teenager with planet Earth, trashing its home in the “infantile” belief that it will not have to suffer the consequences.

And he will say that the UN Cop26 climate change summit which the UK will host in Glasgow in November must be “the turning point for humanity”, when the world must show it can limit temperature rises and prevent the planet becoming uninhabitable.

A day after US president Joe Biden pledged to double America’s contribution to a $100bn (£73bn) climate finance fund for developing countries, Mr Johnson will boost the UK’s share to £11.6bn by increasing the share of overseas investment which goes towards global warming projects.

And the UK welcomed an announcement from China that it will step up its support for poorer nations developing low-carbon energy and will not build new coal-fired power plants abroad.

Mr Johnson thanked the president in person for the new US pledge when the pair met for talks in the White House on Tuesday, telling Biden it was “fantastic to see the United States really stepping up and showing a real lead”.

He presented the president a signed copy of astronaut Tim Peake’s plea for preservation of the Earth’s natural beauties Hello, Is this Planet Earth?

Mr Biden repeated his assurance that he will be among more than 100 world leaders attending the Glasgow gathering, saying the US will be present “with bells on”.

But he poured cold water on the PM’s hopes for a UK/US trade deal, saying only that the subject would be discussed “a little bit” in their talks in the Oval Office. The meeting came as it emerged that the UK is considering a bid to join a North American free trade pact with the US, Mexico and Canada.

In his speech on Wednedsday, the PM will tell the UN that humanity is at a turning point, where it can no longer take the health of the planet for granted but instead needs to take urgent action to halt climate change.

But he will insist that this is not incompatible with economic prosperity, arguing that clean and green energy will deliver the growth of the future.

Mr Johnson’s speech comes a day after talks with Mr Biden at the White House, when the pair agreed to continue pressing the rich world to fill the remaining $15bn gap in the climate finance fund in time for the crucial Cop26 summit.

Despite Washington’s failure to consult London over its withdrawal of troops from Afghanistan or its decision to lift coronavirus travel restrictions, Mr Johnson insisted that UK-US relations were in “fantastic” shape.

But he was forced to backtrack after risking a spat with the president by suggesting the Afghan pullout was badly handled.

Speaking on breakfast TV, the prime minister hinted at dissatisfaction with the US approach, saying: “Could we have done it a bit differently? Maybe we could.” But meeting vice-president Kamala Harris later at the White House, he restricted himself to praising the “brave” US troops who facilitated the evacuation from Kabul airport.

Ahead of the UN address, the PM revealed that the UK was putting £100m from its biodiverse landscapes fund into six of the world’s most important wildlife hotspots, including the Congo Basin, the Lower Mekong and the Kavango-Zambezi region, and was inviting some of the UK’s most polluting businesses to bid for a share of a £220m pot of money to help find new ways to reduce their carbon emissions.

Speaking to the general assembly, Mr Johnson will say that fossil records show that mammalian species typically exist for around 1 million years before evolving into something else or becoming extinct.

At 200,000 years old, mankind is roughly one-fifth of the way through this expected lifespan – the equivalent of reaching its late teens – he will say.

And he will tell his audience of world leaders and diplomats: “We have come to that fateful age when we know roughly how to drive and we know how to unlock the drinks cabinet and to engage in all sorts of activity that is not only potentially embarrassing but also terminal.

“In the words of the Oxford philosopher Toby Ord: ‘We are just old enough to get ourselves into serious trouble.’”

Humanity’s teenage sensibility allows it to cling onto “the infantile belief that the world was made for our gratification and pleasure”, the prime minister will say, adding: “We combine this narcissism with a primitive assumption of our own immortality.

But he will warn that humanity’s adolescence is now coming to an end, and that the Cop26 summit will mark the “critical turning point… when we must show that we are capable of learning and maturing and finally taking responsibility for the destruction we are doing – not just to our planet but to ourselves”.

He will say: “It is time for humanity to grow up. It is time for us to listen to the warnings of the scientists – and look at Covid, if you want an example of gloomy scientists being proved right – and to understand who we are and what we are doing.

“The world – this precious blue sphere with its eggshell crust and wisp of an atmosphere – is not some indestructible toy, some bouncy plastic romper room against which we can hurl ourselves to our heart’s content.

“Daily, weekly, we are doing such irreversible damage that long before a million years are up we will have made this beautiful planet effectively uninhabitable – not just for us but for many other species.

“And that is why the Glasgow Cop26 summit is the turning point for humanity. We must limit the rise in temperatures – whose appalling effects were visible even this summer – to 1.5 degrees.

“We must come together in a collective coming of age. We must show we have the maturity and wisdom to act. And we can.”

Most Britons support tighter restrictions on pornography – but men and...