The award winning New Zealand director of The Crown says it’s incredibly nerve-racking to create a show about the royal family that the family itself can watch. 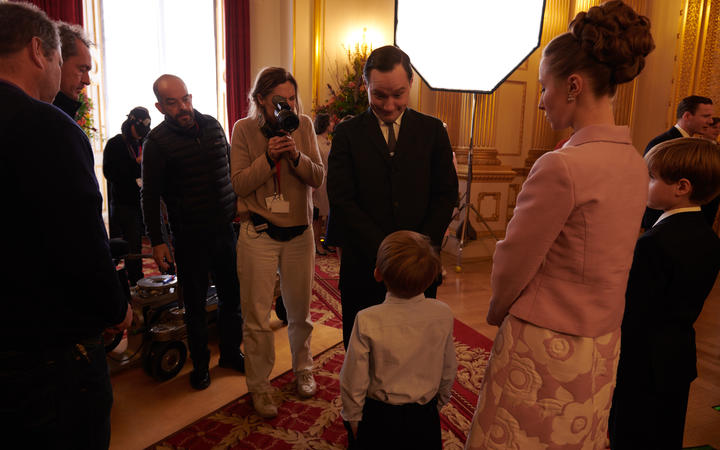 Jessica Hobbs on the set of “The Crown”
Photo: supplied / Des Willie

New Zealand director Jessica Hobbs scooped best drama series director at the Emmy Awards for her work on the Netflix sensation, The Crown.

“It was surreal on the night and wonderful and kind of exhilarating and slightly terrifying,” she told Morning Report.

Hobbs was recognised for her direction on the final episode of the last season which dealt with the marriage break-up of Prince Charles and Princess Diana.

In her Emmy acceptance speech, Hobbs recognised the work of her mum, Aileen O’Sullivan.

“Not a lot of women have won this award so I feel like I’m standing on the shoulders of some really extraordinary people, I’m so grateful for the path they’ve led.

“I’d particularly like to pay tribute to my mum who at 77 is still directing.”

O’Sullivan says Hobbs has always been her own person and directing is who she is.

It was heartening that her daughter won the award, she said.

The Covid-19 pandemic hit during filming of The Crown‘s fourth season.

“We created a number of those episodes from what we had so we had to be extremely deft in our thinking and lateral but we also felt lucky enough to be able to do that.

“I loved it as a creative process. I think sometimes those kind of hardships and economies actually force you to think even more creatively.”

It’s incredibly nerve-racking to create a show about the royals that the royal family itself can watch, she said.

“You’re very conscious that you’re dealing with real people’s lives. You have an enormous research team and you have a lot of information but in terms of what goes on in private conversations and behind closed doors, we don’t know, so we’re conscious that we are representing people.

“For me it’s always about the humanity, trying to understand what’s going on underneath. Everybody behaves badly at different times in their lives and it’s important to sometimes shine a light on that in order to have a greater understanding of our shared humanity.”

Hobbs says she looks at the royal family the same as the rest of us, “just with a bit more at stake and certainly grander locations”.

She says while the golden age of television started before the pandemic, the pandemic seemed to escalate people’s desire for new things to watch.

O’Sullivan is excited by this new era.

“The possibilities with the bigger budgets just become quite extraordinary, exceptional and…the way they can deliver things we just imagine or fantasise about, to the screen, I just feel very blessed to be living in this time.”

Hobbs is in the middle of shooting the opening episodes of season five of The Crown with a “very exciting” new cast.

“We know that it’s our last two seasons so there’s just a lot of care and love and intention into how we close this story, this chapter.”

Operation Solomon: Thirty years because the rescue of the Jews of...

Calgary’s Inexperienced Line committee will get detailed take a look at...